We helped drivers with a lot of tickets in 2019. Now, their tickets can help you watch out for areas around the country with high ticketing counts and the types of tickets given there. Here are the top five states for tickets (based on our data) in 2019. We’ll give you the numbers first, then break it down by state. 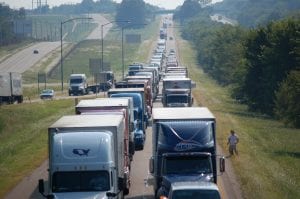 Okay, let’s break all this down. California had the second most tickets overall, but the highest likelihood to get a ticket. With such a large amount of tickets, there’s a decent spread around the state, and the tickets are all for different things. However, Kern county (located on I-5 between Fresno and LA, contains Bakersfield) took the lead by far. The hot spot there was Lamont, which is a little suburb of Bakersfield. Someone there is working overtime giving out speeding tickets. Also, quite a few tickets were given for “Improper Lane Use”; and a surprising number were given for “Log Violations.”

Delaware was next. We only recorded 0.38% of the total tickets in Delaware in 2019, but given the size of the state compared to California, that’s a huge percent of tickets per road mile. Most happened in the north part of the state, and 50% of those were for “Failure to obey a Traffic Device.” Surprisingly, none were for speeding.

After Georgia is Ohio. Little Ohio had the 4th most tickets overall, only 6 behind Georgia. The most tickets in Ohio were in the northern part of the state, just west of Cleveland. The two towns that kept coming up were Norwalk and Greenwich, both of which seem to have poorly marked truck routes or some construction. Most tickets there were for “Driving on Closed Roads” or “Off Truck Routes.”

Texas comes in 5th for miles per ticket, though it had the most overall. El Paso and Houston were the two biggest hot spots. Almost all the tickets recorded in El Paso were for “Speeding.” Houston was a little more diverse with a good chunk of tickets given for “Defective Equipment.”

And that’s our list! At the end of 2020, we’ll bring you updated numbers on all this. Not that we would wish a ticket on any driver, but we are excited about what this year’s data will show. We hope this list has been helpful for you. If you do find yourself on the wrong end of a ticket, please contact us. Our favorite numbers are not how many tickets were given, but how many were dismissed.