Guns in Trucks: What’s the Law?

I’ll be up front with you. This article is going to read pretty much the same as a dozen others you can google about this topic. The issue is whether or not it’s legal for truckers to carry firearms. The problem is that it is legal, but legal in different shades. Let me give you the breakdown:

The umbrella law that everyone points to on this question is the “peaceable journey law.” This is the way it reads:
“Sec. 926A. Interstate transportation of firearms: Notwithstanding any other provision of any law or any rule or regulation of a State or any political subdivision thereof, any person who is not otherwise prohibited by this chapter from transporting, shipping, or receiving a firearm shall be entitled to transport a firearm for any lawful purpose from any place where he may lawfully possess and carry such firearm to any other place where he may lawfully possess and carry such firearm if, during such transportation the firearm is unloaded, and neither the firearm nor any ammunition being transported is readily accessible or is directly accessible from the passenger compartment of such transporting vehicle: Provided, That in the case of a vehicle without a compartment separate from the driver’s compartment the firearm or ammunition shall be contained in a locked container other than the glove compartment or console.”  [TITLE 18[Section 926(a)]–CRIMES AND CRIMINAL PROCEDURE, PART I–CRIMES, CHAPTER 44–FIREARMS]

The federal law allows all drivers, including truckers to carry firearms but forces them to keep the firearm locked away and unloaded. That was the simple part. Now it gets complicated. 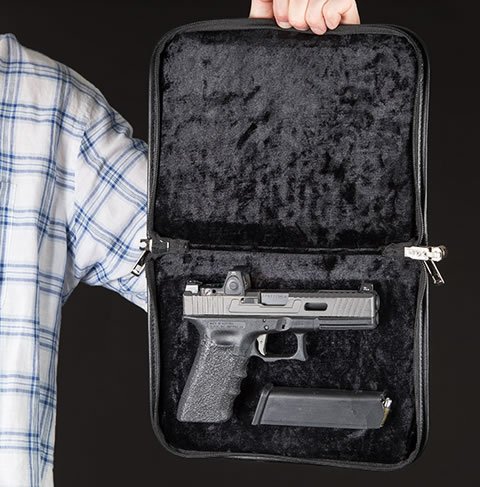 Concealed carry permits have gained a lot of legal ground in the last five years. Most states approve some kind of concealed carry or allow visitors from other states to carry while in-state. However, it’s not a universal thing. Going into each state and how they treat concealed carry permits would be way too long and dry. A good rule of thumb is to check the states you’re driving through on your route. That’s going to take some googling, but the information is out there. A second good rule is to always carry your permit on you. Truckers are used to carrying various registration on them at all times, so this would just be one more card to keep close.

But we’re not done. Even if you get past the state laws, there are two more layers to get tripped up in and get in trouble for carrying. The first one is just Local Laws that may change or contradict State Laws. It’s almost impossible to guard against a local ordinance in Lindsborg, KS (Little Sweden USA) that you had no way of knowing about beforehand. The silver lining to these hidden dangers is that local ordinances almost never get reported to your license and rarely affect your record. However, the other legal layer you need to consider is something you can know about before you lock and load and get behind the wheel.

If you run for a motor carrier, chances are that your company has rules about their drivers carrying firearms in the truck. If you plan to carry, you should absolutely check with your safety manager or someone at the company who can tell you more. This is probably the most important way to protect your job when it comes to the question of firearms. It’s even more important than knowing state laws. If you get a ticket, you can usually keep driving. But if you’re violating a company policy, the carrier will have a real reason to let you go, no matter your driving record.

The best summary I can put on this mess of a question about firearm laws for truckers is that Knowledge is Safety. The more you know about what you’re allowed to do and not allowed to do, the better chance you’ll have to stay clear of trouble. Of course, if you do get a ticket, you can always get help from CDL Legal. We are in the business of protecting drivers’ licenses from tickets and carriers’ CSA scores from inspections. If you have a ticket or even if you don’t, you should give us a call. Stay safe out there.